What Is Society? Toto Papin Explains

Marguerite Martyn was an experienced reporter, but one interviewee lit her up in  a way that many others did not.

She had tracked down Theophile Papin and insisted that he share with her some of Society’s Secrets.

Papin bought and sold real estate. He was as an eminently educated man, a linguist, a lover of rare books, and a collector of valuable paintings.
​
Above all, Papin was known as the "squire of debutantes" because of all the society mamas who called on him to steer their 18-or 19-year-old daughters through the "coming out" that St. Louis society demanded of marriageable females.
​ 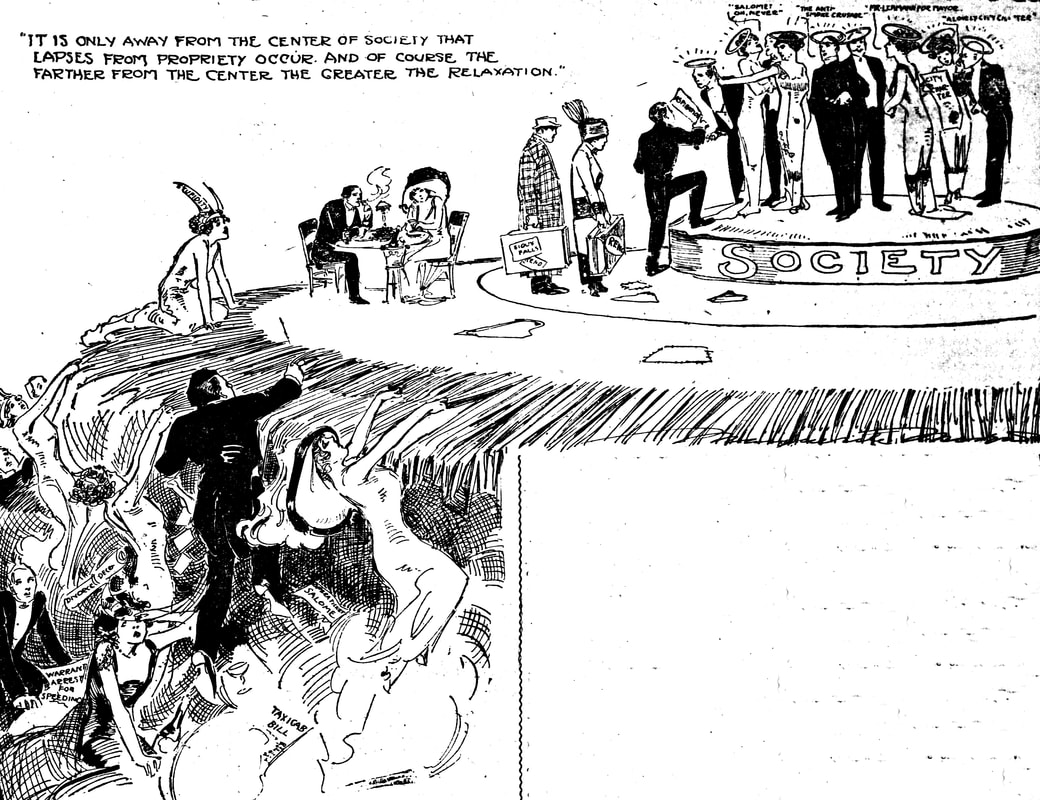 WHAT IS SOCIETY? TOTO PAPIN EXPLAINS

For it is now that I am permitted to draw aside the heavy velvet hangings that curtain “society” and let you see what lies behind.

For Theophile Papin (or “Toto”) has spoken. He has  divulged what actually goes on within The Charmed Circle. Apprehensive society mothers heave a sigh of relief when they are able to enlist his services as a cavalier when their young hopefuls are to be presented to society. Each season's debutantes inherit him from their elder sisters.

Cheerfully, he assumes the responsibility.

His first words when I asked him about society?
​
“What society wants most of all is to be let alone.” (Next image.)
​ 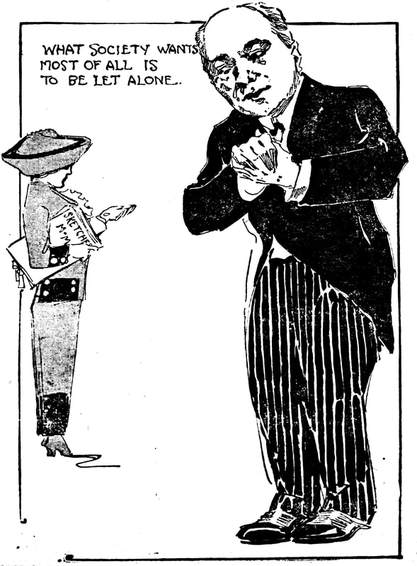 “Oh, that, really. A delicate question. Difficult to decide. Society is complex; there are many Mrs. Astors in St. Louis.

“First of all, there must be intelligence. The sin against society is stupidity, nonconversation. And conversation doesn’t mean that one must talk a great deal. It consists of making others talk.  You must be able to catch and toss an idea and keep the ball of conversation rolling.

“Interest in society involves sympathetic understanding of people, real kindliness, and friendliness. There must be no petty views or jealousies, and the fewer personal feelings the better. Interest involves an exertion to please, appreciation, reciprocity: One must have something to give as well as something to take from society.”

“And birth and breeding? Aren’t they social requirements, especially in St. Louis?”

“No, Society should be catholic — which means wide. In these days of unlimited opportunity, I would not bar a man because his father had no opportunities. An aspiration to society is in itself commendable and worthy of consideration.”

I almost hesitated to ask if money is an essential to the social leader. I looked about the Chestnut Street office, which is the oldest and grayest in all Real Estate Row — no glittering advertisements, no noise or commotion.

Certainly there was an absence of the vulgar display of wealth. Mr. Papin replied:

“Money, I should say, is one of the first essentials in an equipment for society. It is foolish to try to keep up if one cannot afford it. On the other hand, poverty stimulates the effort to improve one’s self and one’s opportunities. One may overcome the shortcoming in the matter of money if one has other qualities that go to make social talent and fitness. In this way, many impecunious people may be very desirable to society.”

Comparison With Other Cities

He moved on to another topic.

“Of course we cannot be compared to a capital such as Washington, where society centers on political affairs, nor to seaport cities, where the population is migratory; nor to a metropolis in the sense of New York. We have no Newport and no café life. But we can well dispense with these extraneous factors.

“At the center of things social  you will find that the men are expected to do things, and the women to be interested  and take the highest notice of facts, deeds, achievements.

“Then there are the men who contribute to the energizing and upholding of certain standards — Pat Short of the Olympic Theater, Mr. Lewis of the Southern Hotel, and dozens of others I could mention, not necessarily of the Blue Book, nor of any particular neighborhood.

“There is a tendency now to get away from false conventions. Also, the new order of things brought about by college education, the interest in sports and outdoor life — they seem to permit of greater freedom.

“Education sobered the most frivolously inclined. Before the war (before 1861), idleness and lack of education, the results of slavery — these engendered laziness, intemperance, and lax morality that would not be tolerated now. The moral standard demanded at the center of society is higher than ever before. It is only away from the center of  society that lapses from propriety occur, and of course the farther from the center the greater the relaxation.”

“What is society’s prevailing form of relaxation?” I asked.

“Dining,” he responded, then gave an example.

“Last night, to my knowledge, there were seven dinner parties in Vandeventer Place. And Lenox, Portland, Westmoreland, and other neighborhoods, of course, had their own.” (All of these exclusive enclaves were set off by walls and gates.)

An Evening to Be Emulated

He became more animated.
​
“The dinner I attended was in a house which has always been at the very heart of things socially. It is in conservative old Vandeventer Place. There were twelve of us — three married pairs, three young women a year or so past the debutante stage, and three bachelors.

“The women were beautifully gowned. One wore a Liberty, long-trained velvet effect. Another a frock just brought from Paris. The men were served with cocktails in the palm room. The women drank nothing.

“At the table the conversations began with the new city charter. There were expressions of regret that Mr. Lehmann could not remain to be the first mayor to execute it. (He was in charge of the panel that had developed the new charter but went into the national government a few days previous as solicitor-general.) We talked of the system of city government in Chicago. We talked of the anti-smoke crusade (against pollution by railroad engines and factory smokestacks).

“We discussed the opera and debated whether we would attend ‘Salome.' "

Richard Strauss's opera was being boycotted by many frightfully shocked hoity-toity women all over the country because of its sensuous "Dance of the Seven Veils."  The police chief in Chicago simply banned it from being shown. But with Mary Garden and other stars, the Chicago-Philadelphia Grand Opera drew seven thousand St. Louisans to its one-night run in the Coliseum, January 11. The St. Louis police chief was there and didn’t see anything wrong with it. I will bet you that none of these Vandeventer Place people stayed away either. See and be seen.

“We had just heard the news of the engagement of Miss Vivien Gould to Lord Decies. One of the women had met him abroad, and all seemed of the opinion that he is quite desiccated.”

That would be Helen Vivien Gould, one of the progeny of the fabulously wealthy Gould family of New York, and Lord Decies was not exactly “dried up,” because he lived to be age 78 when he died in 1944. Helen, though, had a heart attack and succumbed in 1931 at age 38.

But let’s allow Mr. Papin to conclude his soirée  report.

“After dinner one of the men accompanied on the piano a girl who sang some German and some Italian songs. The whole tone was stimulating, uplifting. A very good phase of society."

What is lacking in society?

“The element I most miss is reverence. Why, when I was a young man, there was a code of honor amongst us that no girl should have a bad time at a ball. The ‘stickers’ were sought out first. (Maybe slang for “stick-in-the-mud”? I don’t know.) Often, indeed, it is the girl who needs to be drawn out who proves afterward to be of the most lasting charm.
​
“But popularity seems to involve being a bit aggressive nowadays. I was at a ball recently when to my certain knowledge only one of the younger women made a point of speaking to the older women, the chaperones. And I am sorry to say she was not one of the most popular girls.

“But do not quote me as criticizing the young women. They are charming, charming! They come out usually the first of the year,” he meditated fondly. The prospect of his busy season was not an unpleasant prospect, evidently.

“All are recognized when they first appear — some survive. But in any case they are lovely. Youth in itself is alway attractive.”
“And is that really all there is about society?” I asked.

He looked at me quizzically, almost suspiciously. Then he replied:

“Yes, that is all. I fear I have painted a rather gray picture of society and that you are disappointed. But, really, that is all.”
• • •
Not at all. For Martyn went back to the office and produced these sketches, which she combined into a single layout (top of this page). 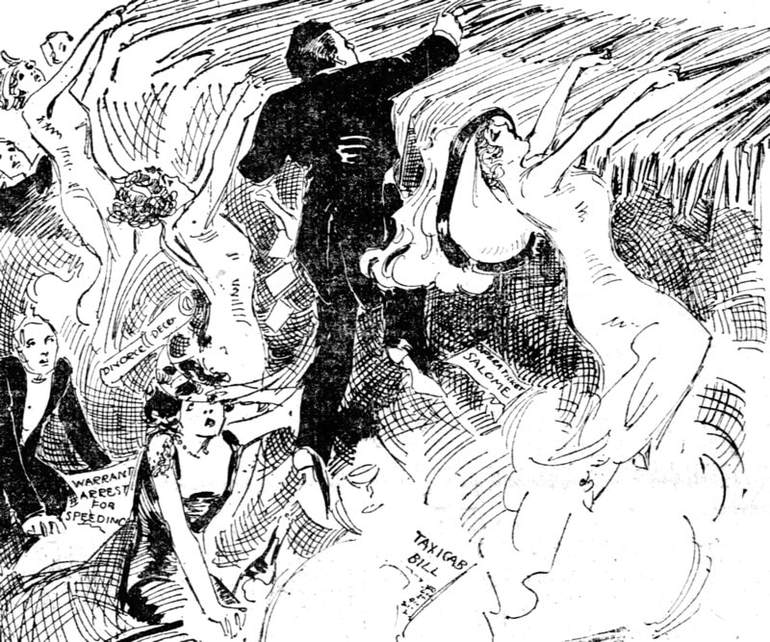 At the left, there’s a clutch of social climbers who will certainly not be allowed to get within viewing distance of the rarefied “society”  circle or be invited to a dinner in Vandeventer Place. One floozy’s right hand is suspiciously close to a wine bottle as she cradles her aching head with the other one. Behind her a guy in a tux is anguished because of a “Warrant Arrest for Speeding.” There is a “Divorce Decree,” a “Taxicab Bill” and an “Opera Ticket Salome” floating among all these losers.

Let’s forget them, and move on. 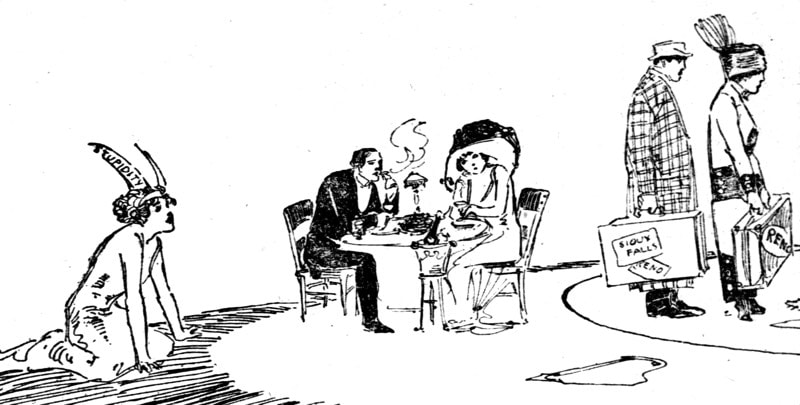 Next we have a kneeling woman who has succeeded in getting a little closer to the charmed circle, but she won’t be taken into Society, even as a guest, because she wears a headdress with “Stupidity” written on one of the feathers.

The jaded couple in the center won’t get in either, but  they don’t care because they are having a good time smoking, eating, and drinking.

Those sad people on the right?  They seem to be in the wrong cartoon, with their luggage marked “Sioux Falls” and “Reno.”

Finally, next image, one man believes he has arrived on the Society podium; he holds what he thinks is a Pass labeled “Aspiration”! He has one foot on the dais and is just ready to mount, but no! The Head Matron holds up her palm in frosty denial. Too bad, chump.
​ 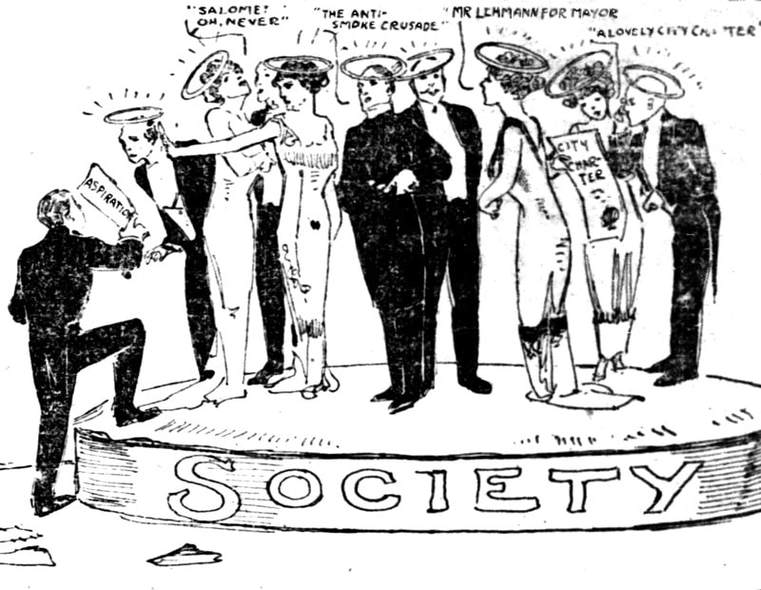 Meanwhile,  those saintly few who have already Made It (or were born that way) are standing around conversing about Subjects Worth Conversing About:


You will notice there is litter all over the place.
• • •